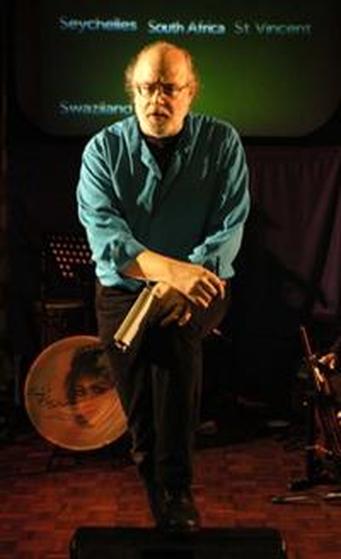 Don creates theatre on a variety of social issues. For the last decade, he has been collaborating with Banner Theatre from Birmingham in the UK to produce a series of Video Ballads. Their most recent work includes Embedded with the Bankers which was commissioned by the National Union of Journalists and presented for their convention in London last fall. With Eyes Wide Open recently premiered in Birmingham, is currently on tour in the UK, including being featured at the UNISON national convention.

In Canada, Don has collaborated with singer-songwriter Maria Dunn on two shows. Troublemakers was featured as part of Alberta Scene at the National Arts Centre in 2005. Last May, their new show GWG: Piece By Piece toured Edmonton, Ottawa, Toronto and Winnipeg.
Mr. Bouzek’s work emphasizes collaboration with various communities. He worked with writer / performer Patricia Darbasie on Ribbon, about Black Pioneers to Alberta. The show was featured last July at the centennial celebrations in the Amber Valley community.

Mr. Bouzek also creates video. His short segments are featured in the new GWG virtual museum on the Royal Alberta Museum website. Similarly, he created 52 short videos, in both official languages, for a centennial website about nursing in Alberta and Saskatchewan. He has made two half hour documentaries for Athabasca U and Access TV. Mr. Bouzek has won two awards from the Canadian Association of Labour Media for his work with unions, including the Canadian Labour Congress, the Communications, Energy and Paperworkers and the United Nurses of Alberta. He is currently editing web video segments for the Alberta Workers’ Health Centre.

Mr. Bouzek is the recipient of an Alberta Centennial Medal for his work in the arts.